Why Analysis of Indirect Spend Is Important to Your Margin & Bottom Line?

Indirect spend typically shows up as “operating costs” or SG&A (Selling, General and Administrative) costs, while direct spend refers to costs of goods and services that are directly incorporated into a product being manufactured or COGS (Cost of Goods Sold).

Procurement teams have traditionally focused on reducing the direct spend, but it is becoming more and more critical for companies to optimize their indirect spend, especially in the current economic downturn. It may significantly affect the bottom line and profit margin.

Profit Margin serves as a good performance indicator against the past performance and similar companies’. The higher the ratio the better. Better managing and reducing SG&A definitely helps boosting the ratio up.

Now let’s take another look at it from an economics perspective, the Break-Even Point.

In economics & business, specifically cost accounting, the break-even point (BEP) is the point at which cost or expenses and revenue are equal: there is no net loss or gain, and one has “broken even”. – Wikipedia.

The Total Costs here are composed of two types of costs: Fixed Costs, which have to be paid by a company, independent of the level of goods or services produced, such as office rents, salaries, and some marketing costs; Variable Costs, which vary with production output volume and can be easily associated to a particular unit of product/service. Please see the graph for explanation. 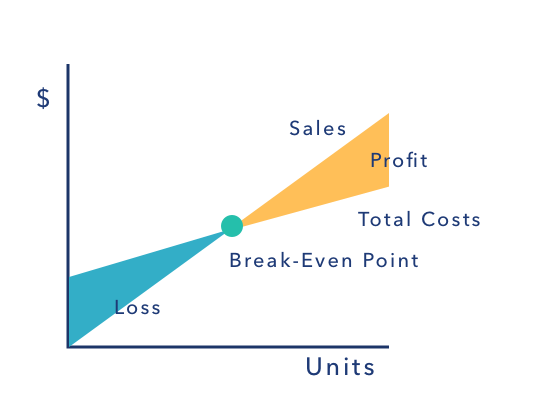 How to reach the BEP with having to sell fewer units, or to make a bigger/faster profit?

There are three solutions:

Any solution will cause the BEP to shift towards left, which means fewer units to be sold before making profit, and decreased loss area and increased profit area as well.

So why are we talking about this? It is because a large part of Fixed Costs/y-intersect is composed of indirect spend.

People usually ignore the indirect spend but it plays an important role in making profit! And profit is the key because even if a company is making revenue it only loses money before hitting the BEP. That’s why they call net profit the bottom line, not sales or revenue, and also why Profit Margin matters more than Gross Margin.

Then why not increase the bottom line by reducing costs as much as we can? Especially now we know the analysis and management of indirect spend is way more important than it seemed!